Business Cycle Basics: Recessions Begin and End Before We Know It

In March 2020, most state governments ordered nonessential businesses to shut down in response to the COVID-19 pandemic. This sudden halt in business activity and the resulting spike in unemployment made a recession immediately predictable, although few had seen it coming.

On June 8, 2020, the National Bureau of Economic Research (NBER) declared that a U.S. recession began in February. This was the fastest that the NBER has declared any recession since it started making formal announcements in 1979. For the previous five recessions, it was six months to a year before the NBER announced a beginning date, and it took 15 months after a recession was over, on average, to announce the ending date.1 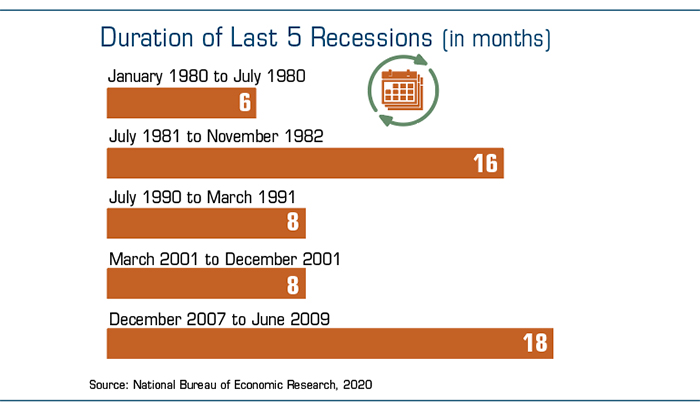 The NBER’s Business Cycle Dating Committee determines the official timelines for U.S. recessions. These economists track a variety of monthly indicators to identify turning points in the business cycle, but their determinations are made with the benefit of hindsight — something the rest of us don’t have when making financial decisions.

The word recession can mean financial hard times for many businesses and people. But to economists, a recession is a specific period of worsening economic conditions.

One common definition of recession is two or more quarters of economic contraction, or negative growth in gross domestic product (GDP). GDP is the total market value of goods and services produced within a nation’s borders, otherwise known as its economic output. It is the broadest and most important gauge of economic activity.

According to the NBER, a recession is a “significant decline in economic activity spread across the economy, lasting more than a few months, normally visible in real GDP, real income, employment, industrial production, and wholesale-retail sales.”2

A house-price collapse kicked off the Great Recession in 2007, which until now was the most severe downturn since the Great Depression, a 43-month contraction that followed the 1929 stock market crash.3 Other past recessions have been caused by deflating asset bubbles, high inflation, tight monetary policy, and oil crises.

Economists measure the severity of a recession by its depth (GDP decline), peak unemployment, and duration (how long it lasts). COVID-19 shutdowns drove the unemployment rate to a record 14.7% in April 2020, and a drastic decline in U.S. GDP over the first half of the year was widely anticipated.4–5 Consequently, even small improvements in third-quarter business activity could make this a relatively short contraction.

Many economists (including some Fed officials) believed that the U.S. economy hit bottom in May or June, around the time state economies were reopening with restrictions, and they expected growth to rebound in the second half of 2020.6–7 It’s much harder to predict when economic activity might return to healthy levels. A recovery could remain subdued as long as consumers and businesses are concerned about COVID-19.

The Federal Reserve moved swiftly to support the economy and alleviate stress in the financial markets. Its emergency measures included cutting interest rates to near zero, purchasing large amounts of government debt, and rolling out lending programs for U.S. businesses.8 To help ease the economic pain caused by the pandemic, the federal government enacted the largest stimulus bill in history. Roughly $2 trillion will be spent to aid hard-hit workers, businesses, and states, which may also help speed up the economic recovery.9

This information is not intended as tax, legal, investment, or retirement advice or recommendations, and it may not be relied on for the purpose of avoiding any federal tax penalties. You are encouraged to seek advice from an independent tax or legal professional. The content is derived from sources believed to be accurate. Neither the information presented nor any opinion expressed constitutes a solicitation for the purchase or sale of any security. This material was written and prepared by Broadridge Advisor Solutions. © 2020 Broadridge Investor Communication Solutions, Inc.